Scientists at the European Molecular Biology Laboratory have reported in the past week that they have sequenced the “HeLa”. This is the genome of the Henrietta Lacks cell line.

The report was accepted with some concerns as many people were unsure why scientists were testing and carrying out experiments on this cell line. The HeLa cell line was obtained in the 1950s without the consent needed.

Given this, scientists were met with some backlash, which is understandable.

As a response to the criticism received, the scientists removed the HeLa sequence from public access online. There is also speculation over whether the research paper will be removed from formal scientific literature too.

It is unreasonable to blame the authors of the paper as this is a concern over the systematic failure of the scientists involved.

The issue lies with the privacy of genomes. The “HeLa” cell line genome sequence has been available to access publicly for several years and is still available.

Researching and testing large-scale molecular biology rely upon a readout of DNA sequencing.

When there is a new genome-scale experiment that surrounds the use of HeLa cells when the data is archived, the findings are made public. This is the case for sequences such as the ChIP-seq and the RNA-seq.

When looking at the ENCODE project, HeLa cells played a pivotal role. They were used in an ambitious way to represent the entire human genome.

Through this project, the HeLa cells along with many others were put under several genomic experiments. The majority of these experiments created sequencing data.

I downloaded and used the files from these experiments and integrated them with the HeLa sequence. I used some other genome sequences that were publicly available from the 1000 Genomes Project (please see below for further information). 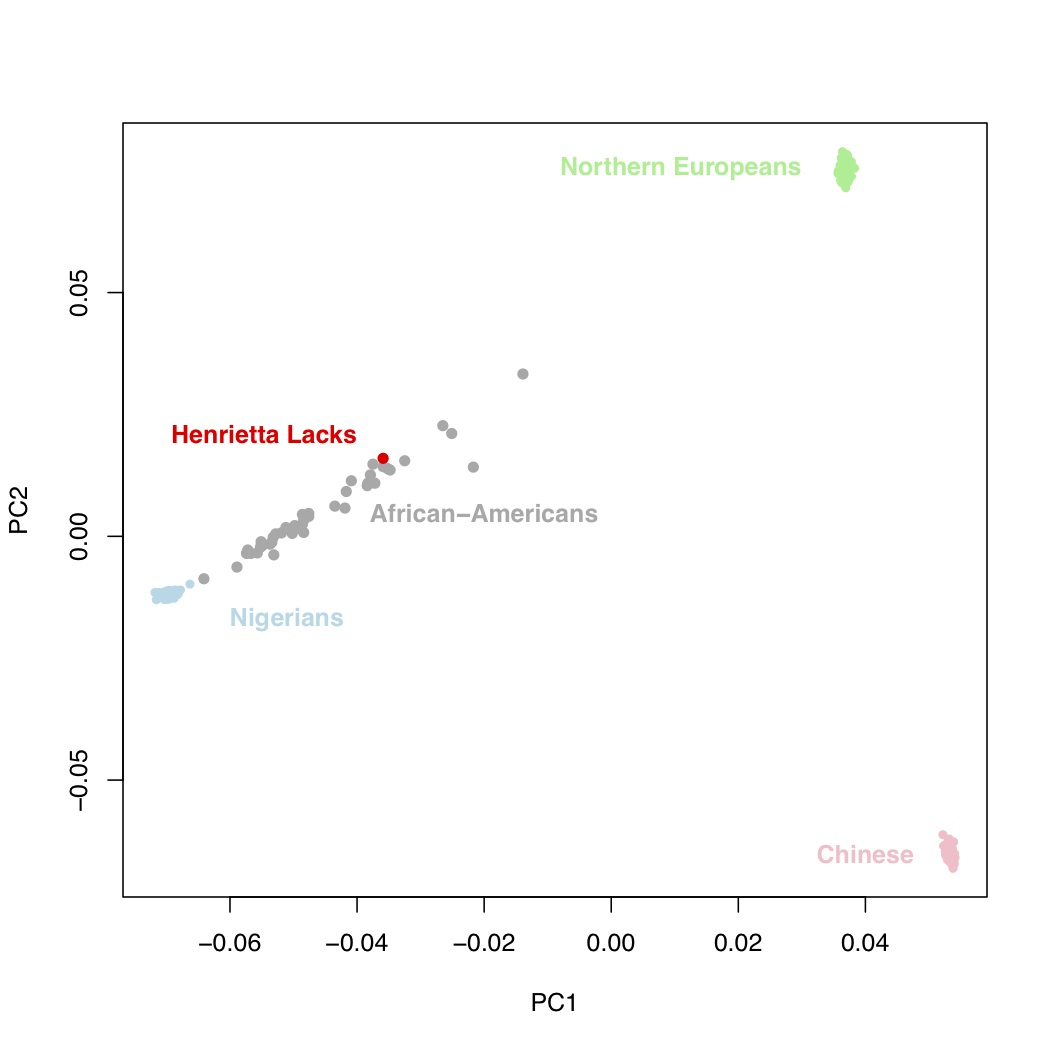 The question people want to know is whether or not the data found from HeLa cells have created enough information about Henrietta Lacks in particular. If you take a look above, it shows the output of principal components analysis.

This genetic data is taken from HeLa, northern Europeans, Nigerians, African-Americans, and Chinese. The points represent each individual. The points that are closer together show genetically similar people.

When looking at the plot, it is clear to see that the HeLa cells belong to an African-American woman or if not, someone admixed between African and European populations.

The results that were found through looking at the ancestry show that genetic analysis when talking about disease risk is often inconsequential. This is relevant when talking about all of the cell lines tested by ENCODE, not just the HeLa cells.

The identity of the donors for the majority of cell lines other than HeLa that are used is unknown.

However, there ways to link the last names of the donors to the cells and find genetic information linked to these specific people. Techniques such as the ones carried out by Gymrek et al., show this method.